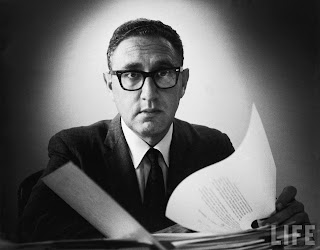 Every so often I get the urge to read one of Henry Kissinger's books. Recently, I finished his first published one entitled Nuclear Weapons and Foreign Policy, a study that was commissioned by the Council on Foreign Relations to assess just how significantly power relations, particularly between the US and the Soviet Union, had been altered by the introduction of nuclear weapons to the post-war world. Though published in 1957 I think it's a work that's still applicable for American foreign policy today even if the world no longer lives under the threat of a nuclear holocaust. I started out trying to do a proper review of the book for the site but struggled because there are so many different (though interrelated) themes that Kissinger tackles in this remarkable work. Instead I'm just going to list some of the more important insights that I gleaned from the book.

1.) The concept of a limited war is a foreign one to American policymakers chiefly because of US preoccupation with total warfare doctrines extrapolated from the overwhelming experiences of two world wars, both of which were "total" wars.

2.) Additionally, US failure to comprehend limited warfare principles has led to an unnatural divorce between diplomacy and war thus violating Clausewitz's famous dictum that "war is politics by other means."

3.) Example: The Korean War; mishandled because the US found itself forced into a limited war that it could never determine how to conduct, evidenced by confused political and military objectives both at the outset of the war and at its end. "Korea caught us completely unprepared, not only militarily but above all in doctrine." (p. 30)

4.) Chief inquiries of the book: has the proliferation of nuclear weapons fundamentally altered the nature of diplomacy? (Kissinger thinks not) Is it possible to engage in limited nuclear warfare? (Kissinger suggests it is). Kissinger notes that most don't believe the latter to be possible; prevailing wisdom is that once nuclear weapons become entered into the equation all out nuclear war becomes inevitable. "The arguments against limited nuclear war are persuasive...in the absence of a natural cutoff point, it is argued, the employment of any nuclear weapon may start a cycle of gradually expanding commitments ending in all-out war." (145)

5.) Kissinger thinks this conclusion is misguided resting as it does on the ever so tenuous slippery slope argument (aka gateway argument). He argues that limited nuclear warfare would be possible if the following conditions were to apply: conducted with highly mobile units only, restrictions agreed by both sides on what could be considered legitimate targets (e.g., bans on certain kinds of infrastructure and large population centers), and a limit to the amount of megatonnage that can be used by the participants.

6.) Kissinger also suggests that the US should re-evaluate the Atlantic Alliance (NATO) because he thinks that, one, the allies aren't bearing enough of the deterrent burden and, two, that they most likely wouldn't have the will to face down Soviet aggression in their spheres of influence. "What if the Red Army attacks in Europe explicitly to disarm West Germany, offering the United States and the United Kingdom immunity from strategic bombing and promising to withdraw to the Oder after achieving its limited objective? Is it clear France would fight under such circumstances? Or that the United Kingdom would initiate all out war which, however it ended, might mean the end of British civilization?" (205)

7.) Domestically, Kissinger suggests an overhaul of the relations between the various military departments in the US, specifically arguing for more centralization in military policy.

8.) Kissinger provides an adroit analysis of Soviet (and Chinese) foreign policy. He describes it as one of "strategic ambiguity". "The nature of the Soviet challenge is, therefore, inherently ambiguous. It uses the 'legitimate' language of its opponents in a fashion that distorts its meaning and increases the hesitations on the other side." (58); Furthermore, mirroring some of the arguments put forth by George Kennan (the so-called father of containment theory) Kissinger states that Soviet policy is essentially expansionist, i.e., it seeks to expand its security sphere via limited aggression taking advantage of US reluctance to engage in limited warfare for fear of escalation into total war and, hence, nuclear annihilation. Strategic advantage: Soviet Union.

As I said this was written in 1957 but it remains a solid work . I don't agree with everything Kissinger argues in the book, particularly his position on limited nuclear warfare. While I accept that the slippery slope argument is dubious where I think his argument is problematic is with the conditions he says must apply if limited nuclear warfare is to be feasible. The difficulty with this position is that it depends on the Soviet Union agreeing and then abiding by said conditions when it's likely that they wouldn't except as another means of taking advantage of the US through its "strategy of ambiguity" by for example accepting the conditions but then failing to adhere to them.

The real value of the book for present American foreign policy needs is to be found in Kissinger's discussion about US failure to comprehend the nature of limited warfare. When it comes to warfare the US's myopic perspective forces it to think that there is only ever one option, namely, total war. This failure to develop a robust doctrine of limited warfare partially accounts for the many international blunders the US has been in since WWII (the Gulf War maybe being the sole exception though I have my problems with the way that war was conducted). In many ways this is a reflection of the still very immature foreign policy of the US. It's easy to forget that this is still a relatively young nation that has yet to form and solidify its own tradition of foreign policy. In many respects this country still operates from a belief that diplomacy and warfare are essentially separate modes of engaging with other states. For the most part this is faulty reasoning and these two ways of dealing with other countries should never be entirely unlinked from one another. And until this is grasped America will continue to misuse its own might. To sum up the development of a healthy doctrine of limited warfare is essential in the avoidance of more foreign policy blunders by the United States something that becomes increasingly more crucial as the United States begins its decline as the sole superpower.
Posted by Chris Petersen at 3:37 AM

The Archives for My Old Blog